skip to main | skip to sidebar

Cairo On the Length | Amira Hanafi 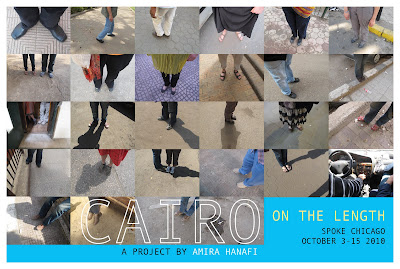 Cairo On the Length
A Project by Amira Hanafi
Spoke Chicago
October 3 through October 15, 2010
Calendar of Events
Sunday, October 3 1:00 – 4:00pm
Walk #1, The public is invited to walk in the West Loop and collect material documentation, followed by discussion at Spoke
Thursday, October 7 7:00 – 10:00pm
Readings of work by Chicago writers who responded to walks performed in Cairo
Saturday, October 9 1:00 – 4:00pm
Walk #2, The public is invited to walk in the West Loop and collect material documentation, followed by discussion at Spoke
Friday, October 15 6:00 – 10:00pm
Closing reception
Gallery open hours (or walk by appointment)
Mondays, Tuesdays & Fridays 1:00 – 7:00pm
On the back of every U.S. dollar bill, there is a depiction of an incomplete pyramid with an all-seeing eye hovering over it. The image appropriates two ancient Egyptian symbols: the Eye of Horus and the Great Pyramid. Inscribed underneath, Novus Ordo Seclorum—“New Order of the Age”—an era in which Pharaonic culture has faded, yet the American psyche remains tangled in an archaic and mystified imaginary of Egypt.
In the days following September 11, 2001, Clear Channel Communications distributed a memo to 1,200 of their radio stations. Along with songs referencing bombs, bullets and airplanes, the Bangles’ 1980s pop hit “Walk Like An Egyptian” was included as “lyrically questionable.” Executives strongly suggested that DJs avoid playing it.
Do these instants represent what Cairo looks like from America? What does the city look like close up? Cairo On The Length is a project that taps the imaginations of over 50 people to construct a collective image of contemporary Cairo. Viewers are invited on a collaborative passage through the city, guided by both locals and outsiders, via a collection of photographs, maps, drawings, texts, videos, and an evening of readings.
Over four months, the artist, a citizen of the United States and of Egypt, drifted for 100 hours with 30 different people in Cairo. Some of the walkers had spent their entire lives in Egypt; some were tourists who had been in the city for a day. Each of 28 segments of the walk began from the end point of the previous segment; conversation and encounters on the walks dictated their paths.
Each segment was documented with photographs and with writing composed by the walkers, as well as through a process of call and response with Chicago artists and writers. Over the course of the four-month project, the artist sent photographs from each walk to Chicago artists and writers, requesting a response in whichever form each individual saw fit.
During the project at Spoke, the artist will host walks from the space through the West Loop. The public is invited to join in a process of observation, collection, and discussion about our own evolving city. The materials produced from these walks will be sent to artists in Egypt, who will in turn create responses. Through this cycle of exchange, a collective image of Chicago’s West Loop will be produced.
Walkers
Ahmad Shawkat, Anne-Marie McManus, Amr El Kafrawy, Azumi Hasegewa, Belle Gironda, Chitra Kalyani, Chris Marrs, Dagmar Stelkens, Doaa Fatouh, Ehab Effat, Elizabeth Metzger Sampson, Hamdy El-Gazzar, Hamdy Reda, Hoda El Shakry, Hossam Elouan, Hussein Mahmoud, Ian Parks, Jack Shenker, Leila El Shakry, Linda Cleary, Mia Jankowicz, Mohamed Alaa, Mohamed Fatouh, Mona Madgavkar, Nick Rowlands, Ramy Yahya, Rana, Shannon Tyman, Shayma Aziz, Stephanie Matti
Respondents
AD Jameson, Aurora Tabar, Ben Lipkin, Calvin Forbes, Caroline Picard, Devin King, Edward Salem, Elizabeth Cross, Ellen Rothenberg, Eric Vandemark, Ira Murfin, Laura Goldstein, Mark Booth, Megan Milks, Michael Thomas, Michelle Tupko, Rachel Araujo, Raja Halwani, Rana Siegel, Robin Morrissey, Rowland Saifi, Sally Alatalo, Shannon Schmidt, Stephanie Nadeau, Stephen Hastings-King
Contact
Artist Contact
Amira Hanafi
(908) 644-3314
onthelength@gmail.com

Email ThisBlogThis!Share to TwitterShare to FacebookShare to Pinterest
Newer Post Older Post Home
Spoke is an artist run space located in the West Loop of Chicago.